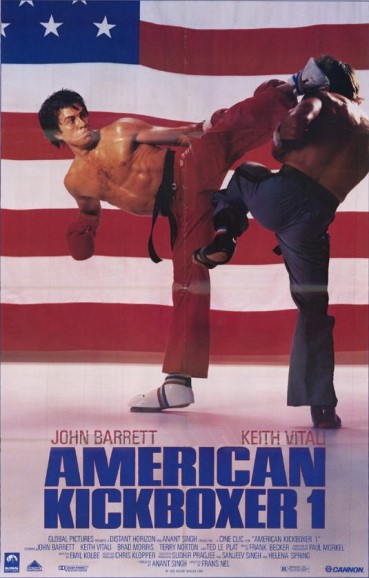 Plot: BJ Quinn (John Barrett) is on top of the world! He’s the middleweight kickboxing champion, has the grudging respect of his peers and is dating the lovely Carol (Terry Norton). His life crashes down all around when he picks a fight with his rival, Denard (Brad Morris) and accidentally kills someone who tried to get between them. He’s sent to jail, now disgraced and isn’t even allowed to fight in any championships when he is released 10 months later. He spends his time training a ‘former rival turned friend’, Chad (Keith Vitali), but his character flaws keep him from truly moving on. But Denard, the new champion, wants to take on the former champ and eventually finds a way to do so. Can BJ Quinn overcome? Lol, BJ…overcome…I’m such a little perv.

The only reason I decided to give “American Kickboxer 1” a look is because the title makes me crack up. I don’t think I’ve ever seen the first movie within a franchise get ‘numbered’, although I suppose I might be butchering the meaning. Maybe it’s alluding to the number one Kickboxer? Actually that sounds retarded. Anyway, the movie borrows a lot from “Rocky”, its sequels, “Kickboxer”, its sequels and any other film that ripped off either of those two classics. Indeed, there are so many cliches that the only traits which give this movie any kind of identity are the bad things. Well, I guess bad is a strong word. Unintentionally hilarious things? That’s probably more fitting. But it was better than I thought it would be, which has to mean something.

The film opens with (real life) accomplished martial artists John Barrett (“Gymkata”) and Keith Vitali (“Wheels on Meals”,“Revenge of the Ninja”) taking each-other on and I was thrown off guard at how decent the fight was. We’re not talking the same level as Jet Li or Jackie Chan, but considering that this is a western film, the choreography was fairly advanced. The filmmakers ultimately decided that rhythm was more important than realism and went that route. Whereas most fights are slow paced and overly cautious, “American Kickboxer 1” has its fighters constantly at each-others throats. They never waste any movements, spending every second either dodging, punching, blocking or kicking. The high kicks especially look impressive and they fit into the context of the battle very well. The fight resembled a dance of some sort, but never became too fanciful. For the most part, the techniques are fairly grounded, if not maybe even practical. Nice sound effects too, although the kicks sound the same as the punches. Now, this isn’t as good as Jean Claude Van Daamme’s best work, but I only compare it to him because he provided the best martial arts in the west at the time. The fact that I’m comparing its opening combat sequence to the likes of “Bloodsport” or “Kickboxer” at all is a compliment. 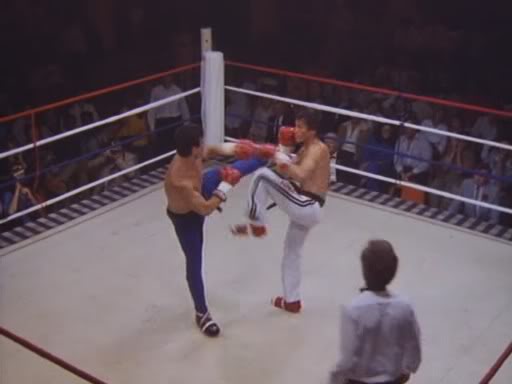 It’s just too bad the film never really captures this greatness again after it’s introduction fight. For one, the film slows down and starts focusing on the drama. Part of me wants to blame John Barrett, because the story suffers from “actors writing scripts” syndrome. There’s a lot of melodrama which includes this awkward and pointless love triangle between BJ, Carol and Chad. Or at least BJ seems to think that there’s something going on. This subplot isn’t really resolved. But even worse, I couldn’t blame Carol if she became more interested in Chad. BJ is a total dick. Even when he’s released, he’s prone to jealous outbursts and treats everyone like crap. Carol deserves some of the blame because she has to know that the affection she’s showing Chad is just pissing BJ off. This means that I spent the majority of the movie wanting to smack these people. It’s bizarre that the film spends a lot of time on this, but then seems to forget about it around half way through.

But when that isn’t doing on, I at least could watch with amusement at how this ‘story’ progressed. They at least tried to develop BJ and while heavy handed, I sort of dug that house metaphor. After he hits rock bottom a SECOND TIME, he goes into seclusion and rents a dilapidated little house. It’s supposed to represent him. He rebuilds it and suddenly, the majority of his issues are resolved. It’s a bit weird as major chunks of his development seems to be missing, but I applaud the effort to be creative about that. A large portion of this movie is BJ going through training montages and looking out into the ocean dramatically, while goofy 80’s music plays in the background. It’s pretty silly! Should I even bring up the homo-eroticism? Whoops, I just did! It’s laid on pretty thickly, but it just adds to that 80’s charm (yes, I know this was released in the 90’s).

To call the acting ‘good’ would be too generous, but I wouldn’t necessarily say everyone did a bad job. Barrett actually does showcase some charisma and could’ve been a solid leading man had…his most famous movie not been “Gymkata”. While the rest of the performances are pretty hammy, I thought they were pretty endearing. The best actor is Ted Le Plat (Willard), who plays a sleazy journalist. It’s strange because he’s a pointless addition to the plot, but also has some of my favorite lines. Brad Morris (Denard) overacts like crazy, but I thought he was pretty awesome. Watching his eyes bug out in fury, or seeing him taunt his enemies in the ring is a lot of fun. Keith Vitali is more likable than his co-star, but his martial acting has been better. I noticed that he dropped his hands a lot during some kicks. Otherwise, he did fine. Sadly, Barrett, Vitali and Morris wouldn’t go on to bigger or better things after this. Barrett and Vitali did a few things before (presumably) retiring and Morris hasn’t done a movie since then. The only person to go on to a bigger career is Roger Yuan (he played the villains in “Shanghai Noon” and “Black Dynamite”), but he only has a small role here. 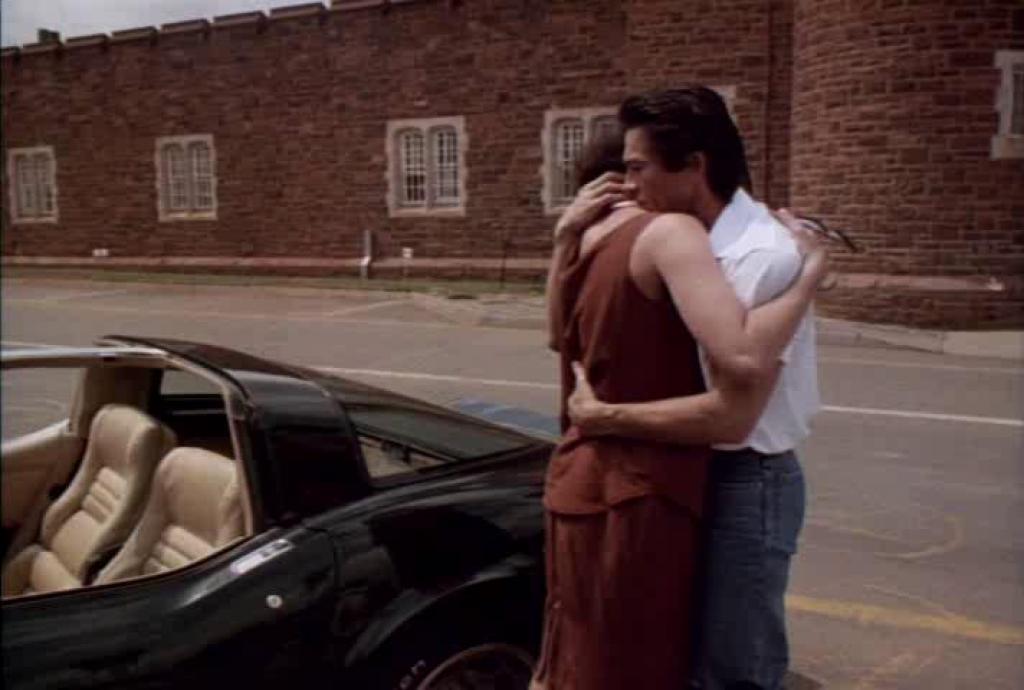 I was dismayed that there wasn’t a whole lot of fighting after the opening act, but when it does happen, the choreography was consistently okay. I dug the rematch between BJ and Chad and their training scenes are interesting because while most martial artists don’t use those kinds of methods, these sequences manage to show off how much balance, speed or power they have. The fights with Denard are a little disappointing. He’s portrayed as more of a powerhouse compared to the more agile BJ or Chad. Brad Morris was (or is?) a genuine badass, but much like Chuck Norris, that never translated well on the screen. His moves just seem a bit too choppy compared to his co-stars. I suppose he made up for it with his powerful physique and energetic performance.

In the end, “American Kickboxer 1” was both a pleasant surprise and a disappointment. After the opening fight, I was expecting an above average martial arts feature. But the movie chooses to showcase its ‘acting’ talent by being more about the drama than the action. At least the clunky attempts to be inspirational kept me amused. Keep in mind that I expected to dislike this movie and it’s always nice when the weaknesses become strengths in their own right. It’s bad and cheesy, but in a good way. But I think this movie had a lot of potential. If more screen-time was dedicated to the actual kickboxing, the film might’ve enjoyed a much better reputation. Who knows, maybe even these actors would’ve been elevated to the ranks of Van Damme or Seagal. As it is, “American Kickboxer 1” is a minor footnote in the realm of the martial arts genre.

Violence: It’s Rated R, but more for profanity. I guess the fights would warrant a PG-13 rating.

Overall: I wouldn’t pursue “American Kickboxer 1”, but if you ever see it on TV, it might be worth a watch.