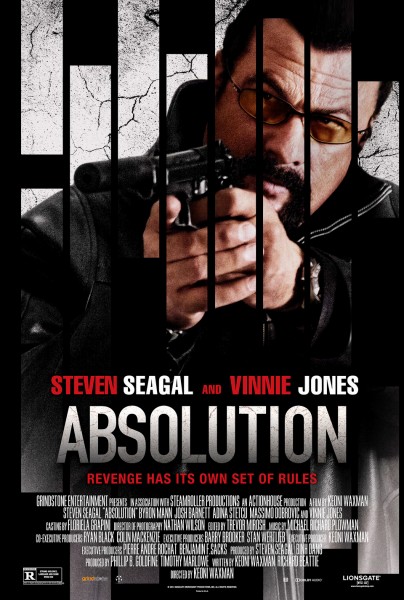 Plot: John Alexander (Steven Seagal) is…Steven Seagal…a bad-ass mercenary with his own Asian sidekick named Chi (Byron Mann). But when a damsel (Adina Stetcu) escapes the clutches of a psychopath (Vinnie Jones) and runs into his Seagalness, he decides to assist her and becomes a target of the aforementioned psychopaths syndicate. He’s got to teach them what happens when they screw with a Steven Seagal! Also known as “Mercenary: Absolution“.

I didn’t realize that “Absolution” was the third entry in the ‘John Alexander trilogy’, which also includes “Force of Execution” and “A Good Man“. In my defense, none of these stories are remotely connected together the only characteristic that John Alexander has is that he’s played by Steven Seagal…who doesn’t push any boundaries with his acting abilities or do anything except mumble his lines, wear a toupee, rely on his body double, cause baddies to wet their undergarments and the ladies to…er, also wet their undergarments. So what separates John Alexander from every other character Seagal has portrayed before? Um…well…His name is John Alexander and I guess that is enough to build an entire trilogy around him. Admittedly my memory is rather fuzzy, but I could’ve sworn that he was a Crime Boss in “Force of Execution” and a Rogue Operative in “A Good Man“, but now he’s just a mercenary. On the other hand, Imdb lists different variations of his name and it’s possible that these films discarded the trilogy concept during pre-production, making this entire opening paragraph pointless! But to be fair, “Absolution” does recycle the same formula as its immediate predecessor, while providing the same level of overall quality…yay?

Much like the first two exploits of Seagalexander, the script is actually designed to push a younger and more talented actor, while coasting off of Steven Seagal’s name. I’m not complaining, but it really feels like Seagal has fallen back to his old ways of not giving a shit about the project or those who actually watch said project. He looks bored and every line is delivered with the same monotonous voice, even when he should be yelling. I will give Keoni Waxman credit for making his action scenes surprisingly…adequate…primarily because the emphasis is on violence. When Seagal strikes someone, they will bleed and a few of the kills actually made me cringe. Byron Mann occasionally struggles with the dialogue, but I’ve been a fan of his for awhile. He’s charismatic, is allowed to show off his sex appeal and he participates in the best action scenes of the movie. The final 20 minutes actually even feature…decent…martial arts! Even better, the camerawork and editing don’t entirely disrupt the flow of the choreography and Waxman’s direction is competent enough to where I ‘occasionally’ enjoyed myself. On a technical level, I had no issue with the production values or the lighting. The filmmakers did a passable job at covering up Seagal’s stunt double and some of the sets are even aesthetically interesting! Most of these praises are faint, but if you’ve toiled through the realm of Seagal’s direct-to-DVD output, then you learn to take every morsel of competency that you can get. 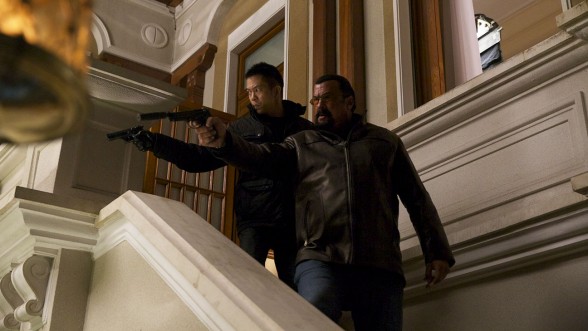 “Absolution” only truly descends into bad movie territory whenever someone says…anything! The dialogue is TERRIBLE, but not laughably terrible as much as it’s just TERRIBLE. Most of the lines are just really redundant and at one point, I swore the lead actress did a quick retake that they forgot to edit out. Seagal declares multiple times that ‘he’s learned not to trust anyone‘, but minutes later introduces a new character and says “I’ve trusted him many times“. I also rolled my eyes when a character expresses shock that ‘the big boss runs the local syndicate’, when that should’ve been f@cking obvious. Seagal asks Chi why he’s still his comrade, but proceeds this by going through their entire history together, even though this seems unnecessary as Chi was there. He knows and I’m aware that the monologue was done for the sake of the audience, but that’s too lazy for my tastes. In fact, the dialogue alternates between ‘the writer doesn’t care‘ and ‘the writer cares too much‘. Some of the lines are very pretentious in their attempts to sound deep, while others are unimaginative statements. At one point, there is supposed to be a comical moment where Chi implies he had a ‘good time’ at the massage parlor. Seagal responds with something like “So you must have had a happy ending“. It’s kind of a mood killer and felt very awkward. This really hurt a lot of the performances, as there is just no way to make these lines sound good! Seagal’s tendency to end every other sentence with ‘Bitch’ only drew more attention to his lethargic performance.

But above everything, “Absolution” is just kind of boring. Scenes, especially during the first half, tend to drag on for way too long and I began drifting in and out of sleep. Everything about the project is very routine, lacking any real inspiration or passion. Waxman just re-uses every action cliche that he can afford, such as the heroes nonchalantly walking away from an exploding vehicle in slow motion. Or a character will beat someone up while saying “This is for *insert character here*” and ending the beatdown/murder with “And that was for me!“. On a technical level, I will concede that Seagal has done much, MUCH worse and at least Chi’s fights were decent, but we’ve seen this kind of movie many, many, many times before. How many times will the final confrontation just be an ass-kicking in Seagal’s favor? How many times will the movie end with a corny love scene?  The formula became stale like 20 Steven Seagal movies ago, but he’s too vain to bother changing things up. Speaking of vanity, did anyone else notice that portrait of Seagal playing guitar on his wall? The camera is sure to show it off, which surprises me the portrait showed more personality the actual person (ZING!).

Nudity: There is some sexuality, but no explicit nudity. I was terrified there was going to be another Seagal sex scene, but it cuts away before the trauma begins.

Overall: “Absolution” isn’t really an embarrassment, but only because Seagal stopped being embarrassed by any of his films a long time ago. It’s still pretty bad, even if it could’ve been worse. Very bland and dull.