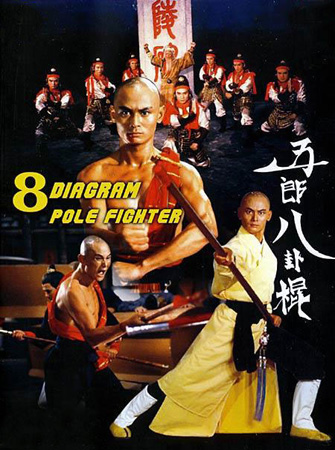 Plot: The Yang family were fiercely loyal to the Imperial Army, but are betrayed by a jealous rival and massacred by an army of mongols. Only two of the seven brothers survive, the unstable 6th (Alexander Fu) and the heroic #5 (Gordon Liu), with the 5th choosing to become a monk. But when his family is put in peril once more, the 5th brother must take up arms and save the day. Also known as “The Invincible Pole Fighter” and “Wu Lang ba gua gun“.

“The Eight Diagram Pole Fighter” is an excellent kung fu opus, although circumstances prevented me from enjoying this cult classic to its fullest. I was short on sleep, had just got back from watching “Jupiter Ascending” in the theaters and had consumed about 1,500 calories- so my body was crashing. What followed was an epic battle between sleep and myself, where I ended up being the victorious one, but it was a Pyrrhic victory. I’m not entirely sure if I slept momentarily during a pivotal moment though, so if I make any mistakes, then I humbly apologize. “The Eight Diagram Pole Fighter” is a flawed masterpiece, if it is a masterpiece at all. Many storythreads felt like they needed to either be omitted or more thoroughly explored and the philosophy doesn’t always make sense. But viewers must brace themselves for the abundance of awesome fight sequences, which get progressively better until peeking with a teeth shattering finale.

I’ve noticed that most reviewers seem to struggle with describing the choreography, often spending more time talking about the storyline or the troubled production than the actual fighting and I’m encountering a similar block. There isn’t a whole lot to say except ‘awesome’. Or maybe I should expand on that and say ‘Kickass of Awesome’ (wink wink). “The Eight Diagram Pole Fighter” favors weapon based battles, particularly when a small group of warriors takes on a significantly larger entourage of enemies. Every blow has an intensity that makes it feel like the fighters are genuinely trying to hurt each-other and the use of violence adds to the authenticity. The finale has to be one of the grisliest battles to ever appear within the genre, as people get progressively bruised, bloody and even start to lose teeth. One cringe inducing moment has to be when a monk headbutts an enemies mouth, whose teeth embed themselves into the assaulters’ skull. Ouch! The choreography is pretty advanced, with seemingly everyone consistently delivering fancy techniques. Gordon Liu stands out the most, primarily because he can make complicated maneuvers look so natural. The difficulty of using weapons in kung fu movies stems from the likeliness that someone is going to get hurt. You can hold back when punching or kicking, but wood and steel are naturally harder than fists and feet. Yet that handicap never seems to slow anyone down, probably because Chia-Liang Liu is a phenomenal choreographer and he’s working with some incredibly talented performers. But beyond the quality choreography, “The Eight Diagram Pole Fighter” never goes on long without another fight occurring, or at least will fall back on some sort of training sequence. The Wolf defanging club was an intriguing idea, providing a new spin on an old cliche. When the 5th (Gordon Liu) is practicing by himself, he gets to show off how acrobatic and controlled his movements are. Breathtaking!

Director Chia-Liang Liu and Writer Kuang Ni use the familiar template of ‘Man joins Shaolin Temple in order to become stronger for the sake of vengeance‘, but add a lot of eccentricities to make it feel more original. For one, the 5th actually does seem to want to become a monk, but his conflict comes from him being prone to violence. Gordon Liu has always been an underrated actor and he sold me on his internal dilemma. I like how women are given placements of power, the highlight being Lily Li as Mrs. Yang- who is implied to be the biggest badass in the entire movie. The eldest daughter (Kara Hui) is also shown to be a competent heroine as well, only screwed over by circumstances beyond her control (whenever she loses). In fact, I felt “The 8 Diagram Pole Fighter” did a good job at exploring the flaws of the various characters, whose changes are noticeable by the end of the story. My main complaint with the script is that there is a lot of content I found to be unnecessary, but there might be a reason behind this apparent filler. I found myself wondering where the 6th brother was during the second half, as so much time was built upon him, so his absence was glaring. For whatever reason, I hadn’t recognized him as Alexander Fu Sheng, who unfortunately died during filming. Apparently this forced them to expand the role of the fifth brother, which might explain the ‘padding’. Now granted, when I think of filler or padding, I don’t think of awesome action sequences and a cool cameo by Chia-Liang Liu, so it didn’t really bother me too much. What did bug me was some of the over-acting. The first act is especially tough to sit through because everyone is screaming so melodramatically. The dubbing only makes this worse, as “The Eight Diagram Pole Fighter” was given the traditionally bad- but not amusingly terrible- English dub.

As a side note, I want to point out that the philosophy debated by the monks and the #5th was flawed. The monks believe in crippling and ‘de-fanging’ wolves in order to protect themselves while not breaking their ‘thou shall not kill’ vows. The fifth argued that the wolves only will recover and return, potentially stronger than before. I kept thinking that the monks were dooming the beasts, who would starve or be preyed upon, but apparently I wasn’t supposed to consider that as no one brings it up. I know it’s meant to be an analogy, but it wasn’t very thoroughly thought out. Also, those matte paintings in the opening looked really fake. But really, who cares? “The 8 Diagram Pole Fighter” provided me some different material to chew on, while always managing to deliver in the action department. The opening battle was impressive, but each fight gets better and better, with the finale being outright amazing. If I can praise anything else, it’s that (matte paintings aside) the set design is very detailed. The cinematography exploits these attractive locations masterfully, providing a visually appealing film- along with everything else.

Violence: Rated R. The finale in particular is brutal.

Overall: “The Eight Diagram Pole Fighter” is a ‘must see’ for kung fu aficionados. The energetic narrative, intense choreography, attractive aesthetics and brutal violence work together to provide memorable entertainment.