(Written by Chad and Evan Law) 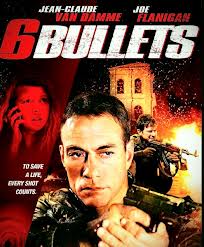 Plot: Andrew (Joe Fanigan) is an MMA fighter who moves his family to Europe, when he secures a potential comeback fight. Unfortunately, his daughter is kidnapped by sex traffickers and the Police can’t find any leads. So he hires Samson Gaul (Jean-Claude Van Damme), a mercenary who specializes in rescuing kidnapped children, and they hunt down the villains.

“6 Bullets” pretty much answers the question of: “What if “Taken” starred Jean-Claude Van Damme and had balls?“. I’m still trying to decide if “6 Bullets” is an exceptional film, or maybe “Taken” just fooled me into thinking it’s better than it was, because most of the comparisons are in favor for this movie. Yet I want to give them the same rating, which doesn’t feel right. I suppose the primary difference is that “Taken” was all about how awesome Liam Neeson was. Neither Van Damme (as much as I adore him) or Joe Flanigan have his charisma or acting chops, but the rest of “6 Bullets” is easily superior. It’s not perfect, but it has an ambitious story to tell and isn’t afraid to bloody its knuckles in the process.

What I liked about this movie the most is how brutal it is. Now, when I say that, you might presume I am talking about the violence. Well, you’re partially right. When someone is killed or hurt, you can guarantee that it won’t be a clean death. Some might call “6 Bullets” mean spirited and I can see why, because kids seem to make up half of the high body count. They aren’t just killed either, sometimes they’re immolated or mutilated. We never see any of this on-screen, but witnessing the aftermath is gut wrenching. The fights tend to represent the tone. The martial arts choreography focuses less on technique and more on the grisliness. That’s not to say the fight scenes are bad. They are pretty good, just expect to focus more on Van Damme slicing people to death with a knife than his flashy high kicks. 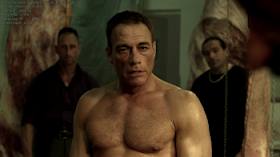 But when I said brutal, believe it or not, I was actually referring to the script. “6 Bullets” deals with the negative effects of being a badass, trying to save a child from sexual slavery. The film opens with Samson Gaul (great name, by the way) successfully rescuing a young boy, but it gets all of the other sex slaves killed in the process. I love how the film actually focuses so much on the collateral damage. It makes me wonder if Liam Neeson ended up indirectly killing dozens of girls, just to get to his daughter. Every action Gaul takes seems to have an effect, but people get hurt in the process. “6 Bullets” deserves lots of credit for exploring this angle. I also appreciated all the tweaks to the formula. The daughter isn’t a complete moron, but is surprisingly resourceful. The wife isn’t a nagging bitch, but arguably is more determined and dangerous than her husband. Ironically, Andrew (The MMA fighter) turns out to be the most useless of the group. He never becomes dead weight, but you expect him to do more, which was another twist I appreciated. He’s just a desperate man who’s totally out of his league.

The ending is a bit faulty. It’s not bad at all, providing plenty of action and drama. The doting parents become shockingly ruthless in their quest to save their daughter and their journey never comes across as farfetched. But it also feels rather conventional and ordinary compared to the first two acts of the film, which were following their own rules. Nevertheless, considering its low budget, the action is pretty awesome. It balances martial arts, shoot outs and explosions. It also is sure to have lots of suspense (especially when the daughter is on-screen) and intense moments.This might be an action-thriller, but it is one of the few hybrids I’ve seen that successfully balances the two.

Yet its main strength is the scope of its screen-play. The bleak atmosphere isn’t born from the locations, lighting or even violence. It comes from the characters. The villains are just as monstrous as one would expect, so it’s tragic to see them bring down good people with them. Gaul is powerful enough to harm his enemies, but he’s incapable of really changing anything. He knows this and it’s ruining him on the inside. Van Damme has mastered this ‘haunted’ persona by now (it’s pretty much the only kind of role he plays these days), but it seems like he does more with it than usual. The parents undergo more character development, because they go from normal to cold blooded. Some of their actions are hard to watch. There are other touches that enhance the feature too. The cops aren’t incompetent? Sweet! The direction usually only serves the story, but those ‘zooming out, wide shots’ are chilling. While “Six Bullets” lacks the super-lead in Liam Neeson and isn’t as focused as “Taken“, it also does a lot more with its concept. Maybe it’s not a great movie, but I love it as such. It’s certainly better than “Taken 2“, if anything.

Nudity: Some, but it’s what you aren’t seeing that freaks you out.

Overall: Don’t expect “Six Bullets” to be great, but know that I really liked it. Fans of Van Damme or the “Taken” movies should definitely give it a look.