Plot: Lord Kira (Tadanobu Asano) conspires with a witch (Rinko Kikuchi) to slay the Lord of Samurai Oishi (Hiroyuki Sanada), in order to steal his lands. Oishi and his fellow Samurai are declared Ronin, samurai without masters, which was a shameful life back then in feudal Japan. But because these Ronin are only Japanese and lack the awesomeness of the white man (apparently; hey, I didn’t write this!), they recruit Kai (Keanu Reeves), a half breed who might not be human. So whitey must lead these Japanese warriors to victory.

I want to thank “47 Ronin” for providing me with plenty of comedic material prior to its release. I heard about the flick when it was first announced, but I was relatively indifferent at first. I have seen many different adaptations of this story and even read the book most of the films followed, even though the book was based on a play. While it’s a compelling tale, none of the movies really blew me away, so I’ve come to the conclusion that the story just doesn’t mesh well with the rules of cinema. When I learned of Keanu Reeves’ presence, my eyebrows certainly raised in concern, but I still didn’t care. Over time, word of the troubled production reached my ears and I wondered how the project was costing $200,000,000. It’s not THAT epic of a story. Then I saw the trailer and…I fell in love. I would preach to whomever would listen about “47 Ronin (2013)“, the true story of how a white man united a bunch of useless Japanese Warriors into fighting dragons, witches, demons and other assorted beasts so that they could finally avenge their Lord, who was manipulated into committing ritual suicide by a rival bent on taking over the world. Not since “Abraham Lincoln: Vampire Hunter” have I felt like I was watching history unfold before my eyes. When I would describe this, the look of bewilderment on peoples faces would be priceless. Because make no mistake, even though I am joking around, this was based on a true story- making the fantasy additions so hilarious. Of course, I knew as the release date crept up on me that the joke would die as soon as I viewed it. I love poking fun at flicks with daft concepts, like “Sharknado“, “Gingerdead Man“, “Death Bed: The Bed That Eats“, “ThanksKilling“, “G.I Samurai” and now “47 Ronin“, but most of these movies end up being unforgivably boring. “47 Ronin” sounds like it would be quite the lark, either as something ludicrously epic or ridiculously stupid, but entertaining all the same. Yet I can’t say I ever really enjoyed myself during my viewing. The film isn’t especially terrible, it’s just kind of subpar and dull. At times, I WISHED it would become atrocious simply so I could feel SOMETHING as I endured it. But a las, I was overcome by its blandness.

I am going to presume that “47 Ronin” entered production before the release of “The Last Airbender“, because I can’t even comprehend why the filmmakers would think casting a white man in a purely Japanese story would go well with people. Sure, Tom Cruise did it in “The Last Samurai“, but that WAS (loosely) based on a true story involving a white guy and it was made before white washing became universally derided. The actual tale of the 47 Ronin did not involve any Caucasians. Even worse, Kai is a boring invincible hero who pretty much is responsible for any success that our heroes had. He probably could’ve accomplished the mission without any of his tag-along Japanese sidekicks. It’s bad that we have an offensively boring lead, but the fact is, the character sounds interesting on paper. He was freaking raised by Tengu and has mystical powers, but that doesn’t make him any more compelling than if he lacked those attributes. Reeves isn’t a bad actor, but he’s dreadfully boring whenever he’s playing a dull role. There are a lot of missed opportunities with him as well, such as when the Samurai who had previously looked down upon him find themselves stuck at his status. There is one bit where he does lose his temper and angrily calls someone a Ronin, but I would’ve liked to see him get pissed off and stick up for himself more. That would’ve given the character a personality and maybe even a flaw! But tragically, a true boring invincible hero has to be brooding, never make mistakes and always win the heart of the most beautiful woman of her country. No one else is especially interesting either, except the witch. She stands out because Rinko Kikuchi is hamming it up so much that William Shatner would even be asking her to tone it down. But despite my dig, she was probably my favorite part of the film. She stood out and kept my attention. The majority of the cast delivers solid performances, as you’d except from guys like Hiroyuki Sanada, Tadanobu Asano and Cary-Hiroyuki Tagawa. But not enough time is spent on their characters, whose personalities are inconsistent, their development is rushed and their motivations are often unclear. Why is Lord Kira so interested in these lands? Does he have a personal grudge against the Lord or Oishi? In the original story, he was just a prick who disliked the Lord, insulting his wife which lead to the Lord drawing his sword and committing a taboo. While Kira was paranoid and had Oishi and the other Ronin followed and spied upon, he never took over their lands or anything. But this Lord Kira is just a conventional villain and we don’t even know why he is so conventional.

The main problem I have with “47 Ronin” is that it doesn’t have any anchor to keep my interest. The characters aren’t just boring, but the screen-time gives various minor characters too much to do (fat guy) while the main characters don’t seem to have enough to do. Every relationship and character arc seems glanced over. The love story? The lovebirds barely have any screen-time together, so why should I care? The bond between Kai and the Lord? It’s talked about, but never shown. Kai earning the respect of the Ronin? One moment they’re hostile and the next they’re friendly. They will randomly cut to Kira and the witch, but even these scenes just feel superfluous and only seem to be there because Kira is played by a big star (in Japan, anyway) and the witch has a bizarre personality. They will also dedicate a lot of time to showing the love interest look sad and she’ll glare at Kira. The witch likes to torment her too, leading to my second favorite scene simply because the lesbian undertones were kind of erotic. But why is it there? Who knows! It never leads to anything. Even the Lord, who gets more screentime than he should have, never convinced me why these guys should avenge him. Sure, he seems cool, but he doesn’t interact with anyone outside of the daughter, Kira and Oishi. Oishi’s relationship with his wife and son are under-explored. He refuses to let the son join at first, but then the son has joined and Oishi doesn’t comment on it. UGH, WHY SHOULD I CARE ABOUT ANYONE IF THE MOVIE DOESN”T EVEN SEEM TO CARE ABOUT THEM!? Even the main gimmick of “47 Ronin“, the inclusion of magic, demons and creatures seems more like an afterthought than the main drive. “300” also blended fact with super fiction, but it worked because I bought the world it was trying to sell. Even before the monsters were introduced in that movie, the world was so strange, over-the-top and comic book-ish that I could believe the inclusions of the abnormal. In “47 Ronin“, the world being presented looks like normal feudal Japan with some supernatural elements occasionally thrown in there so that the trailers can have something to force down our throats. If you’re going to be offensive by having the opening narration use lines like: “Japan, a place forbidden to outsiders and filled with sorcery and monsters” (parphrased), you better exaggerate the locations and give me a lot of that. I don’t want to see normal Japan, where every once in awhile a monster will attack. I want to see a fictional, fantasy-like version of Japan, where myths are a reality. I want to see MORE monsters, dragons, witches, demons. Then they won’t feel so out of place.

Still, “47 Ronin” could win me over if it succeeds in the spectacle department…But it doesn’t. There are a few really gorgeous shots, some of the sets were pretty impressive albeit kind of silly. Lord Kira’s expressionistic Castle made me laugh, when I don’t think that was the intention, but I felt something. So I’m counting that as a praise. I also really dug the fight scene between Kai and Oishi. The choreography was surprisingly advanced, Keanu sold his techniques like an expert (Hiroyuki Sanada is an expert, so…) and I dug some of the diversity which came with the duel (Kai using his fists). The good scenes just make the rest of the movie suffer even more though, because they’re present during the first half and “47 Ronin” never lives up to them. The CGI usually looks too much like CGI, although admittedly “The Hobbit: The Desolation of Smaug” might’ve spoiled me when it came to computer generated Dragons. The remainder of the action is…standard. Most of it has acceptable choreography, but I don’t think as much time was put into filming the fughts because the camerawork is shaky, the editing is too tight and the movements aren’t as convincing. The finale is okay, especially as I got to see Hiroyuki Sanada fight Tadanobu Asano (although the lighting sucked), but the special effects which drive the ‘Kai vs Witch’ battle were pretty shoddy. The ‘fire’ effect was pretty cheesy. The backgrounds were inconsistent, sometimes being cool and other times being bland. The pacing was erratic, which is strange because the narrative moves so quickly but the scenes themselves feel like they go on forever. I did view this in 3D and watching “47 Ronin” in 3D is like watching “47 Ronin” in 2D- except it costs extra. Lame. 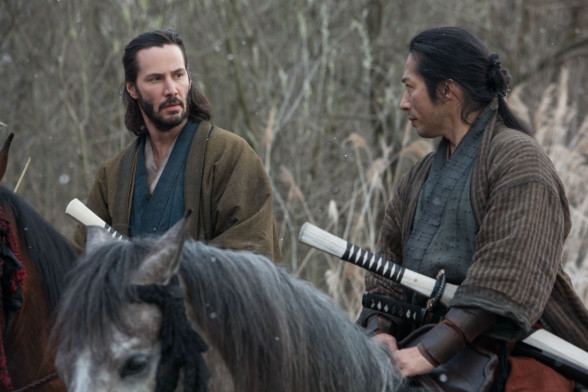 “47 Ronin” isn’t as awful as “The Last Airbender” or “Dragonball Evolution“, but at least those movies stand out. I can still remember quite a bit about them, despite not having watched them since their releases. That’s because they were just REALLY bad and I sincerely believe the initial hatred of those films has morphed into amusement by the majority of the viewers. “47 Ronin” never has anything as retarded as a bunch of dudes using these fancy bending movements just to move a rock, or a character saying ‘geeko’, or Earth benders forgetting that they were standing on Earth, or a character saying they must race against time to stop a villain but is forced to wait hours in a hole because they were supposedly trapped- only for him to just jump out, revealing he could’ve done so at any time. “47 Ronin” is just average at best and below average at worst. Yet that almost makes it worse because I’m sure I won’t remember it beyond a week. It didn’t turn out to be better than I expected, like “World War Z” (another troubled production) did, nor is it a complete disaster in terms of quality. It’s legacy to the world will be how much money it’s doomed to lose, but for me, it’s only purpose was to be the butt of a few jokes prior to its release. Now that I’ve viewed it though, the joke has died.

Violence: PG-13, although it is shockingly violent for the rating.

Overall: “47 Ronin” isn’t really worth watching, either as an action-fantasy or as something that’s curiously terrible. It’s just kind of dull.